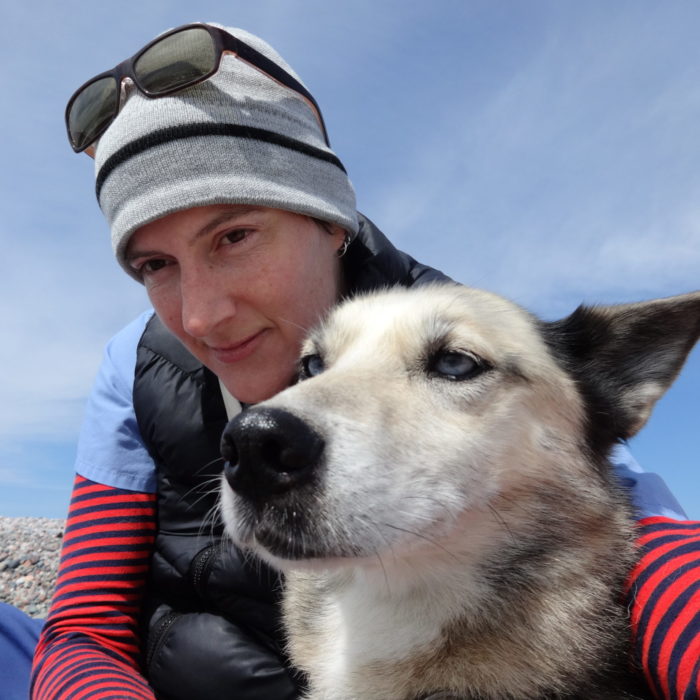 Dr. Fujda seems to thrive on adventure and experiencing different places. During the summers of vet school, Dr. Fujda didn’t spend a lot of time in her hometown of Calgary. Instead, she and her dog Maggie spent time exploring Vancouver Island and the Gulf Islands. Dr. Fujda knew she would be back – eventually, promising Maggie she would retire on the beach one day.

As life circumstances would have it, however, after graduating vet school she and Maggie moved to Alaska. There they both became enamoured with skijoring. After a few years though, they longed to move back to Canada but did not leave the north. They moved to Whitehorse. Dr. Fujda had already fallen in love with sled dogs and there she got herself a sled dog team (Brodie, Lucy, and Fargo) from the SPCA and a small sled, winning the red lantern (or near red lantern) in little community races they competed in for many years. She also met her soon-to-be husband at one of those races.

After 7 years in Whitehorse, the whole family including the king of the household senior Reggie-cat journeyed across the country to settle in Dartmouth, Nova Scotia. Those dogs did indeed retire on the beach.

Dr. Fujda took a position at a general practice for her first few years in Dartmouth but also started taking casual shifts at the local ER clinic: Metro Animal Emergency Clinic (or MAEC for short). This was where Dr. Fujda realized her true passion in veterinary medicine was in the ER. She left GP and spent several years full-time at MAEC until both she and her husband realized it was time to be closer to family. They moved to Victoria in early fall 2022 with their Nova Scotian dog and cat. They have no plans to move cross country again any time soon.

When not at work, Dr. Fujda loves to travel and learn new things. Currently, she is practicing drawing and painting, learning Spanish, and she would love to be better at tennis. She loves exploring the trails of Vancouver Island by foot and by bike. She also saw a whale when on the ferry recently, and she has plans to see a lot more!