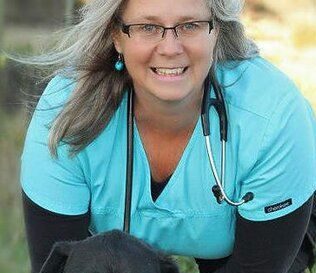 Dr. Calverley grew up in Winnipeg, Manitoba and graduated from the Western College of Veterinary Medicine in 1991. She then moved to British Columbia and practiced veterinary medicine at her own small animal practice, Mission Veterinary Hospital, for 23 years while raising three daughters and many 4-legged creatures with her husband. Her interest in veterinary rehabilitation was piqued when a good friend opened a swimming pool for dogs in 2001. As a former water polo player, she was interested in how physiotherapy could help her patients, especially the older, arthritic ones. After a trip to Holland for the fourth symposium on Physical Therapy in Animals in 2006, she pursued her training in animal rehabilitation with the Canine Rehab Institute and became a Certified Canine Rehabilitation Therapist in 2009.

Specializing in Veterinary Orthotics and Prosthetics, she has worked as the Canadian distributor for Orthopets and, more recently, as a partner clinic, Orthopets Vancouver, providing over 500 devices from dogs and cats to pigs and llamas since 2011.  She is thrilled to be joining the Rehab department at WAVES and bringing veterinary orthotic and prosthetic services to the Island as Orthopets Victoria.

When not at work, Dr. Calverley enjoys sailing, kayaking, hiking, and spending time with her family at their house on Salt Spring Island.